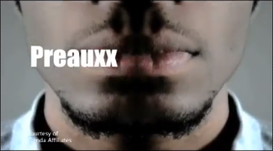 Catherine Patton
November 20, 2012
Local hip hop artist, Preauxx has made quite the buzz for himself in Memphis. Rapping for about 9 years, the New Orleans native has been featured in publications like the Commercial Appeal and the Memphis Flyer as well as in countless blogs. He has performed over 250 times in Memphis including the campuses of the University of Memphis and Rhodes College.
Recently, Preauxx's music was featured during the Indie Memphis Film Festival in the independent film, Far Away Next Door. The movie is about a group of inner-city kids who, like Preauxx, must overcome obstacles in order to realize their dreams. The executive producer of the film felt that Preauxx's music was perfect for the film because of the motivational you-can't-stop-me attitude in the songs.
Despite set backs and road blocks, Preauxx continues to drive toward his dream with a large tattoo on his forearm that reads "MOTIVATION" to keep hm going. He says it is a testament to the kind of person he is.
To find out more about what it takes to be an independent artist, check out Preauxx's interview on Grammy GPS.

Visit Preauxx's Website to check out his music, or read about him in the Memphis Flyer.

Catherine Patton
Nov 13, 2012
Officials are discovering that domestic violence is a growing problem in Memphis. In response, students at the University of Memphis are doing their part to spread awareness on the issue.
On the last week of October, the Student Activities Council of the university hosted Open Your Eyes, It's Real: Domestic Violence Awareness Week.
The committee chair, Stacey Taper, planned several events surrounding domestic violence awareness. One event included a Domestic Violence Exhibit held in the University Center Ballroom. The exhibit featured cardboard cutouts that had attached to them facts about domestic abuse. They were also painted purple, the official color for Domestic Violence Awareness Month.
SAC also hosted a candlelight vigil and balloon release for women who lost their lives to domestic abuse.
To find out more about domestic violence and how you can help or get out of an abusive relationship, please visit the Erasing Domestic Crime website.

Can Natural Hair Fit Into the Corporate Setting?

As we all know, looking your best when preparing for an interview or another day in the office is very important. Obviously, a nice suit and good hygiene are essential, but where does natural hair fit in?
With the popularity of natural hair among African Americans resurfacing, the need to be informed about natural hair is increasing. Furthermore, the fight for the acceptance of natural hair in the corporate setting is intensifying as more women choose to no longer chemically straighten their hair. As a result, people who wear their "natural hair" are approached with criticism that their hair is not appropriate, or may not be professional enough for a corporate setting.
Catherine Patton visited different natural hair beauty salons and a University of Memphis career adviser to try to get to the bottom of this issue.

Read more on the issue of Natural Hair acceptance:
Dreadlocks vs. Corporate America: Real-Life Stories of Making the Choice
Natural Hair and Professionalism. An Oxymoron?

People of Memphis are celebrating a new  holiday. It's called 901 Day, and September 1, 2012 marked the first time the holiday was celebrated city-wide.
Events where scheduled throughout the day to celebrate the city and promote positivity and fun in the community.
Everyone was welcomed to participate in the events as well as host events. The holiday's official website features everything that took place in the city as well as information about 901 Day.